A crisp fall color with a head that dissipates quickly. This beer is clearer than you’d expect with a steady stream of bubbles rising to the top. Upon first whiff, our noses are hit with a sour citrusy aroma. Luke is intrigued by the smell, Hannah is not so sure. The first sip comes along with an explosive burst of flavor, which disappears as fast as it appeared. A strong hit of carbonation fizzes through your mouth kick-starting the flavor. The pumpkin is definitely there up front, but a disappointing showing in the long haul. While the initial taste has a pleasant pumpkin flavor, it dies very quickly. We’re not going to sugar coat it: the aftertaste is not good…reminiscent of the grogginess of when you first wake up in the morning. Please don’t go make out after drinking this beer. Perhaps it was made with the leftover pumpkins from a different pumpkin beer? With each new sip, we hope that the pumpkin flavor will last, but alas, it continues to vanish. We are going to have to find creative ways to use up the remaining 4 bottles in the six-pack we purchased, as this is not a beer to serve at a party… unless you want all of your guests to leave. 40/100

And now, for Alex’s take:

Deciding to switch up a seasonal brew is always an exciting new kid at school addition for any brewery, and the anticipation I’ve felt at the thought of Samuel Adam’s Pumpkin Batch, a pumpkin saison, has been palpable. Readers from past seasons may recall my dislike for both Harvest Pumpkin Ale and Fat Jack – surely Pumpkin Batch could turn the pumpkin tides for my adopted hometown’s beloved (so big it’s almost not) micro-brewery. This saison pours a clear golden orange with only trace amounts of lacing. For a pumpkin ale, the aroma doesn’t contain any of the usual suspects for spices, just a healthy dose of flowery Belgian yeast. Though real pumpkin, ginger, and all-spice all claim to be in this beer, the only people at this ummmm party? are meekly roasted malts, some nutmeg, and even less cinnamon, along with the yeast from the aroma which creates a chalky aftertaste.

This tastes like an off-off brand of regular Sam Adams that accidentally got packaged in pumpkin beer bottles. Sorry, pumpkin beer strike three, you are OUT. 43/100 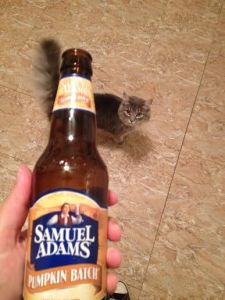