We first need to preface this review by admitting that neither one of us is the biggest pumpkin beer fan. Seems like every brewery is throwing their hat into the pumpkin beer ring with one spice bomb after another, but we were definitely intrigued when Boulevard announced that its entry into the pumpkin beer realm would be a sour. Pumpkin pie spice, Brettanomyces, barrel aging? Why are they doing this? How can this even work?… Well surprisingly, it does.

The beer fills the glass with a slightly hazy, orange auburn hue like changing autumn leaves that reminds us that leaf peepers will soon be flooding New England to gaulk at. Cinnamon, nutmeg and ginger immediately hit your nose. On the first sip you get the brett funk up front, almost like a nice tart apple, which then subsides and finishes with all that pumpkin pie spice of cinnamon, nutmeg and a hint of all spice. If you were looking for big pumpkin flavor in this beer, you’re out of luck as it is subtle to nonexistent, but we kind of appreciate that it doesn’t taste like drinking a Yankee candle. While Funky Pumpkin isn’t a smack in the mouth from George Clinton kind of funk, the barrel aging rounds out this beer to give it the mellow tartness that we totally dig.
We both would give this an 83 or 84/100.

Funky Pumpkin does not leave any party up to chance by kicking things off with a disco ball in the shape of a pumpkin, shining just a little extra boogie with leaf and stem. Pouring a brilliantly clear clementine hued orange, this sour immediately ensnares with a lightly soured aroma dazzled with ginger and nutmeg. The Brett yeast immediately splashes into this palate, tapering it’s pleasant sour wave into releasing a mild amount of pumpkin sweetened with barrel aging, and spiced with all-spice, and smaller traces of cinnamon and nutmeg. As this freshman Sour 101 warms, more sweetness is released into a vanilla smoothness from barrel, just not from trace amounts of pumpkin.

The Sunny Delight of sours – refreshing and juicy. A little bit tart, a little bit sweet, enough funk for a solo dance party. 82/100 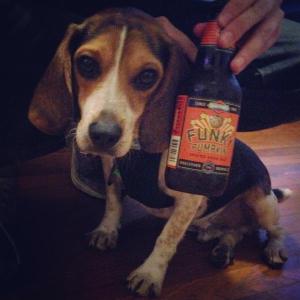