NicTM: Very light body, med carbonation. Taste is a little unripe pumpkin, not much spice detectable in the taste, mostly in aroma. 6/10

NicP: Not a huge amount of pumpkin, and the light spice doesn’t showcase it as I’d like. For my preference, needs more of both. 1 pumpkin

NicO: A rather light beer that could benefit from a little brown sugar+more spice to sweeten+bring out the pumpkin. Better out there. 62/100

AlexAA: Clear yellowy, orange with 1/8 inch of foam, smells of cinnamon and the smallest bit of nutmeg 6/10

AlexTM: watery, no body, sour tinge at first. I can strain to taste cinnamon, but so little pumpkin that I might be imagining it. 2/10

AlexO: someone w/ cinnamon on their hands rinsed them in orange, sour water. Boom. 21/100 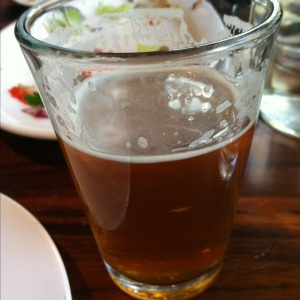